I ran the masters heat of the Liberty Mile last night, finishing in an official time of 5:35 - good enough for second place female (it was a mixed heat).

The Liberty Mile is the third installment in my summer tour of road mile day trips.  The first two were the Loudoun Street Mile in Winchester, VA and the Harrisburg Mile in Harrisburg, PA; I have upcoming trips to Flint, MI and New York, NY to round out the series.

Pittsburgh is admittedly a fairly far day trip - about 4 hours drive each way.  But it's a scenic drive, and the mandatory diversion into Breezewood, PA halfway effectively splits the trip into two drives of just under 2 hours each.  Easy.

I should note at this this point that some people hate Breezewood, while others love it.  Me?  I adore Breezewood.  It's completely open and unashamed of its hilariously commercial nature - there's no deception, just de-acceleration.  And it welcomes all travelers, regardless of origin or destination.

When stopping at Breezewood to fuel up and pee, there's a shared communal experience with travelers that you just don't get at other gas stations, or even at rest stops.  It's much like how I imagine an ultra-runner aid station feels - a community of those who are temporarily resting and resetting.  We make eye contact and grin, or roll our eyes and sigh in mutual acknowledgement of how much further we have to go.

So yeah, Breezewood.  Fantastic place to briefly visit, though I wouldn't want to live there.  Which I guess is why nobody actually lives there.

Leaving home around 10 am got me into Pittsburgh at 2 pm, which gave me plenty of time to "check in" to my local base - the Town Place Gym, and stow my stuff in a locker there.  Then I walked the 100 feet to the Market Square, where I read my Kindle, ate my "pre-race breakfast" and caught up on email before picking up my bib.  Then back to the gym for some DIY yoga and pre-race stretching.
Around 6:30, I headed out to warm up (my heat started at 7:25).

When warming up for a road mile, I always like to jog the course once or twice to check it out.  In doing this, I'm looking for two things:

1) what is the condition of the road - is one side or the other more prone to potholes, uneven pavement, etc?    If so, I'll make a mental note to stay on the better side.

2) what are the turns like, and how best to approach them?  One thing I learned from jumping horses at speed was that the fastest distance between two points isn't always the shortest dista 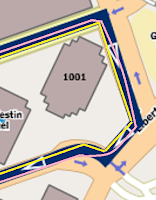 After refreshing myself on the Liberty Mile course, I mapped out my plan for the turns.  While most of the runners would try for a sequence of sharp turns to hold the inside yellow line, I'd swing a bit wider and run the pink line.  Smooth is fast, in riding and in running.  And...I'd also avoid all the traffic on that "inside lane."

Looking around, it was hard to know who my competition would be.  There were a few women wearing those bikini bottom things, which looked intimidating.  But I've learned that how one dresses and how one runs are two different things.

The gun went off, and a group surged ahead of me (this was a mixed heat).  I could see one woman pulling further ahead to my right, while another was immediately on my shoulder to the left.  I ignored them both while I settled into a controlled hard rhythm.  Then I started looking around.

Woman in white sportsbra was pulling ahead, but I let her go - it was too early to really start fighting.  The woman to my left faded, and I was in second as we passed the quarter mile mark in 1:22.  (I glanced at race clocks to get splits for later consideration - my GPS signal was very off in Pittsburgh, so I didn't set my watch to autolap each quarter).

We wrapped around the set of turns, and per my plan I hung a bit to the outside and tried to smooth out the curve.  This worked well, as I passed a few men.  The first woman was still ahead, about 5-6 seconds.  Somewhere during these turns we passed the half mile marker, but I missed it.

As we rounded the last turn, with about 700m to go, she was still ahead.  For a moment, I resigned myself to second, and then I got hold of myself.  There was still a lot of race left, and if I was second again, it wasn't going to be for lack of trying.  How badly did I want to win this race?  Pretty darn badly.

I narrowed my eyes and dug in deep, and when I glanced at her again, I was closer.  I repeated that sequence a few more times, and then I was right near her.   I dug deep yet again (how badly do you want this), and then I was ahead of her, right as we passed the 3/4  mark at around 4:04.

I closed my eyes and dug in.  Just a quarter mile.  And the 200m to go mark came up surprisingly fast.

And then my body started stiffening - that whole "piano falling on your back" thing where your body gets ridiculously stiff and uncoordinated.   Argh!!!  I've had this happen to me before - always when I start my kick too soon.  Whatever - I was a marathoner - I could totally do this.

The finish line loomed so close, and yet so far.  I did everything I could to keep my knees lifting and my body leaning forward, even though I wanted to tip backwards.

And then the finish line was right there, about 20 feet in front of me.

And then my toe caught a crack, and I was on the ground.  As I clambered back to my feet, the other woman passed me and crossed the finish.  I stiff-legged across the finish, and then draped myself over the fence edge.  Second.

Goddammit.  I really wanted to win that race.

All awards were mailed, so after I gathered myself and congratulated the winner, I headed back to the gym (she clearly felt a bit bad about winning that way, but she shouldn't have - she crossed the finish line first, and fairly).  Sent a few text updates to a) my sig other and b) my coach, and then showered before getting back in my car for a long, sulky drive home (though Breezewood did cheer me up a little).

(video sourced from Imgur)
Posted by AKA Darkwave, AKA Anarcha, AKA Cris. at 12:42 PM