I ran the St. Charles Running Festival 5K today, finishing in a time of 19:15 for a 15 second 5K PR and the overall female win. It was a fun day.

The St. Charles Running Festival is in Waldorf, MD, which is south of the DC area, and not a place that DC area runners traditionally travel to for their races. Their loss. This was a really nice race. You can tell a lot about a race from the website and the communications that the race has with its runners, and everything pointed to this race being the anti-Hot Chocolate. Good communications, certified course, clear game plan for race management, “B-tag” chip timing (and cheaper than the RAM Racing debacle). A+.

Originally, I had planned to run the 10 Mile race at the Running Festival. Well, actually I had originally planned on running the GW Parkway 10 Miler which is next weekend. But I opted out of that one several weeks ago after learning that the course had a lot of concrete. Fast running + concrete+downhills is a recipe for injury for me, and while I’ll take that risk for an “A race”, I didn’t care that much about GW Parkway. So, I looked for another 10 Miler and found the St. Charles Running Festival the week before. Mostly flat, no sharp turns, pavement, score.

But then my coach noted that I would be running 3 ten mile races in 5 weeks, and suggested that was a bit much (I have Broad Street in Philly on May 6). And though I love 10 miles, I had to admit he was right, especially since I had also raced the Rock and Roll National Half 2 weeks before Cherry Blossom. My overall goal for this year is to avoid injury/setback, and doing 4 races of 10 miles or more within a span of 7 weeks was risking too much. So, I dropped to a 5K. And the first one that came to mind was the St. Charles Running Festival 5K. The 5K looked to be a fairly fast course – though the times from last year were a bit slow, I attributed that to it being a first time race.  Plus, when I mapped it out, I realized that Waldorf was actually closer to me than some of the other 5K options in the area.

So, I drove down to Waldorf. The race didn’t start until 8:30, but they were pretty clear that the roads were being shut down at 7:30, and they’d prefer that race day bib pick-up be done by 7 am, so I left my house around 5:50. As it turns out, the drive down took all of 40 minutes (in point of fact, the same amount of time that it takes me to metro and walk to the start of Army 10 Miler), so I had plenty of time to chill in my car in the tons of parking near the finish line. Then at about 7:30 I started my stretching/jog the course/use the inhaler/use the john/drills+strides/retie shoes 10 times routine (note that the order of the above does vary).

At 8:25 we lined up. Since I don’t know this area, I didn’t know who would be my competition. But I did note at least two other women who were placing themselves at the front. Yay for competition. They first asked everyone planning on holding between 5-6 minute pace to come to the front. Though I wasn’t sure exactly what I’d be running, I figured it’d be something faster than 19:30 (6:17 pace). But shooting out at sub 6 minute pace would be a bit overly aggressive. So lined up right behind the front pack of men.

Then they started us and they were off. And one woman shot out at a pace akin to what I run my 400m repeats in. I chased her for a second, and then came to my senses – if that was her realistic 5K pace, then that was that. So I let her go.

About a minute later another woman passed me with authority. She was running fast, but not straining, and it was a bit harder to keep from going with her. In fact, I did get sucked in behind her for a few moments. And then reminded myself that I needed to run my own race and not someone else’s. So I let her go and settled into the pace that felt right for me. I did keep her in my sights, though. I focused mostly on my effort, but would look up ahead from time to time to check in on where she was. There was a part of me that really wanted to win this race, and I had to repeatedly remind myself that long distance races are frequently lost in the first mile, but rarely won.

[as an aside, it’s so funny that we’re so prone during racing to being sure that the position that we’re in during the first 3 minutes indicates how the race will go, when in fact it’s the last 3 minutes that’s determinative. Took a lot of will power to be patient and back off.]

So, held my pace. And within about half a mile, the woman that had shot off to the lead at ~5:20 minute pace was fading. I passed her without much note – my concern was on the other woman ahead of me, who was now about 10 seconds ahead, and maintaining there.

And then, as we circled through the neighborhood that was the first half miles of the course, I noted that I was very slowly closing on her. By the first mile marker, she was only about 8 seconds ahead, and I was slowly reeling her in. So now was the time to be patient, and just let the next two miles of the race do the work for me.

Sure enough, the gap kept eroding slowly but surely, and by about the 2 mile mark I was even with her, and then pulling ahead. And so I just maintained my effort, while staying relaxed, as we headed towards the stadium (the finish of the race has you run a loop around the outside of the baseball stadium).

As we got closer to the stadium, we turned into what was a decent headwind. Not horrible, but definitely notable. It had apparently been a slight tailwind earlier in the course (so I hadn’t noted it), and then a cross wind. Now we faced it head on, and it persisted for the rest of the course (even after we turned away to wrap around the stadium, it seemed like there was some wind-tunnel thing happening).

But I just relaxed into the wind, didn’t stress, and focused on maintaining. I was pretty careful about not straining or overpushing, and maybe my caution cost me a slightly faster time. But I knew that I was in first, and I didn’t really know how far the woman in second was behind me, and there was no good way to be sure. I also knew that the finish line was up an incline, and I wanted to have enough in reserve to be able to be able to run up that incline with authority, especially if she was closing. Basically, I wanted to have something in reserve to protect the win, which I cared more about then an extra 2-3 seconds on the clock.

And, despite my caution, I continued to pass people (all men) in the third mile, and also pulled right behind a guy who had been about 8 seconds in front of me when we turned onto the stadium drive (around 2.25 miles). I was pulling even with him when we passed the 3 mile mark and headed up the incline. I relaxed up the hill, and then had to veer a semi-hard right to break the tape, which was off to the side. 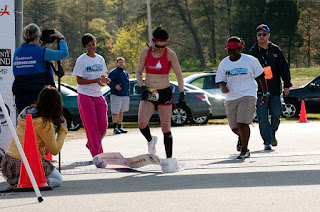 Or…not break the tape. Turns out that the tape was NOT the type that has a velcro attachment in the center (so…y’know…it breaks). Nope – it was a pretty wide tape akin to what they use in Iron Man races on TV, where the triumphant victors picks it up and brandishes proudly overhead.

Or…if you’re me, get tangled up in it and almost trip, and then take some time to make sure you’re unencumbered and steady on your feet before stopping your watch…