Nothing all that notable this week.  Still doing intervals, tempo, long run.

My coach normally includes extended tempo workouts at marathon pace as part of the half-marathon training cycle.  However, we're skipping that for me this cycle.  This was at my request - I felt that I had done a large amount of marathon pace running over the past 6 months, and so it made sense to limit it in favor of a greater focus on the Friday tempo workouts, which are done at 10M-half-marathon pace.   One side-consequence is that each of my weeks looks pretty much the same.  Which is unfortunate in that it makes my weekly reports less interesting, and also means that I have to avoid the temptation to compare weekly workouts against each other (c'mon - we all do that).

I do seem to be rebuilding fitness.  Or at least my Garmin thinks so.  I don't put a lot of faith in the actual race time predictions, but I do agree with the indicated trend. 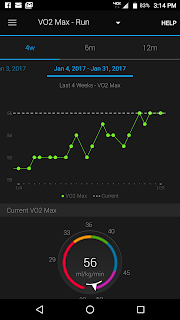 Most of my distractions and thoughts this week have been non-running related, and since this is (again) not a blog about politics, I'll skip that here. Makes my blog more boring, but boring ain't always bad.

Monday: In the morning, yoga and 7 "miles" pool-running.  Foam rolling at night.

Saturday:  In the morning, 10 miles very easy (9:02) with drills and strides.  Upper body weights plus core and injury prevention work in the afternoon.  Foam rolling in the evening.

There are times when one questions one's life choices.  I hit that point on Tuesday morning at about 6:26 am, as I sat in a pitch dark portapottie in 22 degrees Fahrenheit, fumbling with a toilet paper roll that was frozen solid.

My first thought was that, if only one of my kittens was present, this problem would be easily solved, with the toilet paper shredded, but more or less available for use.

My second thought was to ponder why I had let my World of Warcraft membership lapse - "running" via an animated character on a screen has the side benefit of consistent availability of a heated bathroom..

Thankfully, at no point did I stop to think about how or why the roll was so damp as to freeze.  And I'm going to restrain from speculation now.

Eventually, I did get things rolling (literally). I departed the we-can't-call-it-Don's-John and sprinted to join the hill workout in progress, which had started 15 seconds earlier.    The hill workout went very well, so Tuesday was a low and a high.  (well, technically about 8 lows and 8 highs)

The rest of the week was good - I'm at the point in coming back where I'm seeing steady gains, though my speed has come back far quicker than my stamina.  That's not surprising, though - I've noted that when returning to fitness after a break, people rarely have trouble running the paces they used to run - they just struggle to sustain them.  Plus I regularly do exercises like weighted step-ups, single leg deadlifts, and split-squats, which I'm sure preserves the muscling I need to run fast, even when I'm not doing speedwork.

Next week we return to the track full time.  No more hills.  Good riddance to the portapotties of Iwo Jima.

Monday: In the morning, 7 "miles" pool-running plus yoga.  Foam rolling at night.

Thursday: In the morning, yoga and 8 "miles" pool-running.  Foam rolling at night.

Saturday:  In the morning, 10 miles very easy (9:32) with drills and four strides and upper body weights plus core and injury prevention work..  Foam rolling in the evening.

First week back in training.  Hills on Tuesday went fairly well - I felt good enough to do seven repeats instead of the six I had planned (the workout is 6-8, but I usually shoot for the short end of the range when returning to workouts).  Of course, this could have been because I was still finishing up the prednisone burst for last week's asthma flare.  This is the third time in my life I've done a course of prednisone, and every time I do, I feel like I have unlimited endurance.  I don't necessarily run faster on it, but I can go forever.  Were I to race on it, I could certainly see holding my normal 5K pace for 5 miles or longer.

(for those of you who are wondering, prednisone is banned in competition, but allowed out of competition.  So there's nothing wrong with taking it to combat an asthma flare, intractable migraine, or other health issue, as long as you don't race while taking it)

Friday I was back to the track.  And sluggish. Mainly because I'm out of shape, but coming off the prednisone certainly didn't help.

(and of course, this is likely why prednisone is banned in competition, but allowed outside of competition.  There is no benefit to training on this stuff, and then coming off of it to race - the first few days post-prednisone burst are shitty.  Plus prednisone has all sorts of nasty side effects, including significant weight gain and bone density loss).

Friday's workout was a "slower" tempo (fine with me, trust me) followed by 800s and 400s, each to be negative split.  My mechanics felt off during the workout - this is normal for me when I haven't done any fast running in a while - so after the first 800m I swapped to a few 200,s with my back to the wind to practice running fast and relaxed with good form.  It helped some, but I have a LOT of running drills in my near future.

Sunday's run was planned to be progressive, but I decided to keep it easy - conditions were a bit risky for injury (14 degrees and fresh snow for footing).  Plus 14 miles was the longest I've run since CIM, so there was benefit in just getting the miles in.  I followed the run with yoga in a room heated to 95 degrees (which felt wonderful).  So, approximately an 81 difference between the two.  I think they do something similar in Siberia.

Next week should hopefully be warmer.

Monday: In the morning, 11 "miles" pool-running plus yoga.  Foam rolling at night.

Tuesday: In the morning, 10 miles including 7 Iwo Jima hill repeats (~500m up, then 200m jog, 100m stride, and 100m jog down to base of hill.  Followed with injury prevention work and 800 yards recovery swimming.  Sports massage at night.

Thursday: In the morning, yoga and 9 "miles" pool-running.  Foam rolling at night.

Saturday:  In the morning, 10 miles very easy (9:03) with drills and strides and upper body weights plus core and injury prevention work..  Foam rolling in the evening.

This week was 55 miles of running and 20 "miles" of pool-running -- training log is here.

I've joked that my goal for the last few weeks since CIM has been to shed all that extra fitness, and I think I've accomplished that.  Or at least my Garmin thinks so.

Part of my purported fitness loss resulted from last week's head cold.  Though I had kicked the cold by the end of the week, its after effects lingered in my lungs.  For much of this week I sounded like Fran Drescher with laryngitis. Weight lifting and yoga were fine, but anything requiring aerobic effort was more challenging than I would have liked, and accompanied by coughing fits.

I managed to get in to see my asthma doctor on Friday, and she confirmed this was an asthma flare resulting from the head cold.  The solution was a 5 day blast of prednisone.

The prednisone did a great job with the asthma flare - it's magic stuff.  But (because it's magic stuff), it's not cool to race on while taking it, so I sat out the New Years races this weekend.  I did manage to get some "marathon pace feel" miles in on Saturday at the end of my not-so-long run - my first non-easy running since CIM.   I can't say I'm in great fitness, but it didn't feel too bad (of course, that could be the prednisone too....)

So that's a start.  And I get to start workouts again this week, with hill repeats on Tuesday morning. I'm looking forward to it.

Monday: In the morning, 10 "miles" pool-running plus yoga.  Foam rolling at night.

Wednesday:  In the morning, 10 miles (9:42) plus drills and two hill sprints, followed by upper body and core weight training and foam rolling.

Thursday: In the morning, yoga and 10 "miles" pool-running.  Foam rolling at night.

Sunday: In the very late morning, 12 miles (9:23) plus drills.  Yoga in the afternoon, followed by foam rolling.

Posted by AKA Darkwave, AKA Anarcha, AKA Cris. at 12:31 PM No comments:

Email ThisBlogThis!Share to TwitterShare to FacebookShare to Pinterest
Labels: training
Newer Posts Older Posts Home
Subscribe to: Posts (Atom)
Related Instagram:
Well, I'm Trying to Cat
Just another runner, posting about pool-running, injury avoidance and recovery, and my training, plus some random musings. This is the one and only pool-running blog.