This was an off week, as I rebooted after the Garry Bjorklund Half.

My post-marathon breaks have a distinct pattern - 5-10 days of no running, then a return to running, but with a focus on hills and fartlek-type stuff, and avoidance of the track and racing for a few weeks.

I'm doing something similar here, but abbreviating slightly, since my last race was a half-marathon. I took 5 days off of running, with a focus on yoga and social pool-running.  Then I shifted back to easy running, plus a "fun" workout of short hill repeats.

I like the short hill repeats as a transition workout.  The fast running is relatively brief, and the recoveries long, so the workout is pretty easy - it's more about encouraging good running form and power than building or maintaining fitness.  It works well for ensuring that I don't regress into shuffling habits, while still allowing me to recover and refresh.

The next weeks are going to be much of the same - just hills and fartleks.  It's a nice physical change, and also a mental break.

Monday: 8 "miles" pool-running in the morning, followed by a sports massage.

Saturday:  10 miles, including 8 short hill strides- 60-70 seconds up, and then ~2:30 jogging recovery down to the bottom.  Follow with injury prevention work and 500 yards recovery swimming.   Foam rolling at night.

Posted by AKA Darkwave, AKA Anarcha, AKA Cris. at 2:05 PM No comments:

Just a place holder for the past week - highlights were covered in the race report.  Next week will be boring as well, since I'm taking a training break.  I had planned on taking that break at the end of July, but based on Saturday's race, I'm thinking it's best to move it up to now.

Monday: Yoga and 8 "miles" pool-running in the morning.  Foam rolling at night.

Sunday: Just travel and a bit of foam rolling.

Posted by AKA Darkwave, AKA Anarcha, AKA Cris. at 3:07 PM No comments:

I ran the Garry Bjorklund Half yesterday, finishing in a time of 1:25:11.  Good enough for the age group win, but far off of what I had hoped to run on a great weather day.
***
Getting to Duluth from DC is always a journey - 8:30 hours door to door. The flight from the DC area to Minneapolis is about three hours, and then the drive from Minneapolis to Duluth is another 2:30.  Factor in transit time to the airport from home, security, and car rental time, and you have a long day.  Which is why I always travel two days before.
The trip went relatively seamlessly - the only hitches being a) my salt shaker of all things needing to be inspected by TSA and b) frustrations with the satellite radio in my rental car.  For long drives, I like to have satellite radio so I can listen to either electronic music or NPR.  Unfortunately, my car wasn't offering NPR as one of the channels, so I went with Howard Stern as the next closest option.
Once in Duluth, I swung by the UPS store to pick up the box I had shipped to myself, and then over to the expo to grab my bib, where I was excited to see that, as a member of the elite field, my bib had my name on it, rather than a number.  Pretty darn cool. 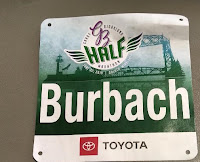 
I like to keep stuff very quiet before a goal race, and this one was no different.  Just stretching, a quick drive around to see a few sights, and a shake out jog of two miles - the first into a massive headwind, the second with amassive tailwind.  The forecast was to have that same tailwind on race morning, plus perfect temperatures (49-51).  Fantastic.
***
Race morning dawned very early.  The half-marathon started at 6:15 am local time, which meant a 3 am wake-up.  I took my asthma meds, ate, stretched, and then made a point of leaving my dorm room at 4:30 to get on one of the very first buses leaving for the start.  For the half, the buses drop one a fair distance from the race start (about 10 minutes walk), and I wanted enough time to get situated and warm-up without feeling rushed.  As it turns out, getting there on the first bus was just the perfect amount of time.
I warmed up with 2 miles, plus two 400s at half-marathon effort.  Things felt good with that, so I didn't think I needed anything more.  I like to ease into half-marathons anyway - if I'm too warmed up, I go out too fast.
I noted as I warmed up that the temperature was perfect - cool and dry.  There was very little wind, which was surprising, but I suspected it would pick up as the morning went on.
I lined up, and then with very little fanfare other than a “ten seconds to go” warning we were off.
***
Pursuant to my plan, I eased into the race with a slow build over the first two miles - after that I'd hold a hard effort, with the intention of trying to find a higher gear in the last 4 miles after Lemon Drop Hill.  I let people pass me for the first 2 miles while I focused on running the tangents (the road winds, so you can rack up a lot of extra distance if you don't pay attention).  Then I hit a hard cruise and started passing people, which would continue for the rest of the race.
As I ran, I noted that the wind was picking up - it felt like a crosswind, rather than a tailwind (of course, one never appreciates or recognizes a tailwind when one has one).  It was light at first, and then stronger.
The miles felt like they were passing by quickly.  I was working hard, right on the edge, but also in control, and I kept reeling in others.  Around mile 7-8, things started getting hard, which I expected.  What was unexpected was that my quads were starting to stiffen and get sore similar to how they feel in a marathon.  I had noted this once before, at Broad Street earlier this year - and it struck me as odd then.   But I had promptly forgotten about it, since I was so happy with the race as a whole.
At mile 9, we hit Lemon Drop Hill, which felt harder than I remembered it from last year.  Which in a way made sense, since I was running up it faster than I did last year.  I worked my way up Lemon Drop conservatively and then opened up my stride on the back side, coaxing what I could out of my legs.  I was starting to feel gusts of tailwind as the wind picked up, and it helped.
I used a similar strategy on the second hill about a mile later (I’m told this one is the “Super One” hill, after the nearby supermarket) - conservative up, and then open up on the backside to roll into downtown Duluth.  My legs were stiffer yet, and starting to limit things, but I was able to lock into a rhythm and keep on pace, reeling in another two guys.
The final mile + of this course involves a left turn onto a bridge, and then a drop onto the waterfront, before doing an S-curve back to the finish line.  As we twisted and turned, the ever-increasing wind shifted - sometimes a headwind, sometimes a cross wind, sometimes a tailwind.  I know this course well enough now to be able to count down the turns and estimate how far I am from the finish, so I visualized a hard 1600 on the track and counted down the laps.  A younger guy briefly passed me, and then I reeled him back in, and had just open road ahead of me.
Finally, I saw the marker for mile 26 of the marathon.  I have a solid kick of about a quarter-mile at the end of longer races, so I had told myself that I was going to kick at that point, rather than wait until Mile 13.  So, I lapped my watch, narrowed my eyes, and emptied the tank. Which didn't have much left in it.
I couldn’t read the time clock above the finish until I was just a few steps away.  At which point I realized it read 1:25:xx, and was shocked.  I had been certain the whole time that I was running a big PR between the great weather, the people I was passing, and how hard the effort felt.  However, for the second week in a row, I saw a time on the clock far slower than what I expected to run.  And this time, I knew the course was accurate.
***
Manual splits were:
Mile 1: 6:40
Mile 2: 6:34
Mile 3: 6:26
Mile 4: 6:33
Mile 5: 6:36
Mile 6: 6:20
Mile 7: 6:34
Mile 8: 6:31
Mile 9: 6:28
Mile 10: 6:25
Mile 11: 6:32
Mile 12: 6:24
Mile 12-12.9: 5:49 (6:26 pace)
Last .21: 1:19 - 6:16 pace


So… a well paced race, just slow.  Put another way, I ran the best race I had in me - it’s just that I didn’t have within me the race I wanted that day.
The silver lining was that my time was still fast enough to win my age group.  It was a nice flip side to Broad Street, where I was really happy with my time but missed out on a nice glass trophy.  This time, I got the glass trophy and the awards ceremony but missed the time.  Such is life.
As for why the race didn’t go better? Plenty of food for thought there.  It could have just been a random bad day - sometimes that happens.  The pollen was higher than normal for June in Duluth and my eyes, sinuses, and throat were itchy/burning the whole time I was there, so that might have something to do with it. On the other hand my breathing was totally fine, which isn’t normally the case when my allergies are bothering me.
But...the most obvious and likely suspect is my training between Broad Street and Garry Bjorklund - instead of maintaining my fitness and extending it, it seems I took a step or two backwards.  So...I need to make sure I understand the mistakes I made so I don’t repeat them. The theme for this spring has been: some good races and some good lessons learned.
All of that will help in my next training cycle. The lessons learned from disappointing races fuel the great ones. But for now, I think this race is a signal that it’s time to take a training break and reboot. Other notes: - Temps were in the high 40s, with low humidity. Basically, the best weather this race has ever had. - I stayed in the dorms at UMD for the fifth year in a row - highly recommend. - I normally find "Minnesota nice" endearing, but it is remarkably frustrating when trying to navigate a four way stop sign intersection.
Posted by AKA Darkwave, AKA Anarcha, AKA Cris. at 1:42 PM No comments: