About 4 years ago, when I first got seriously into running, I was heavily into World of Warcraft.  Not in the obsessive don't-bathe-forget-to-eat-lose-job way, but it was something I enjoyed and played quite a lot. 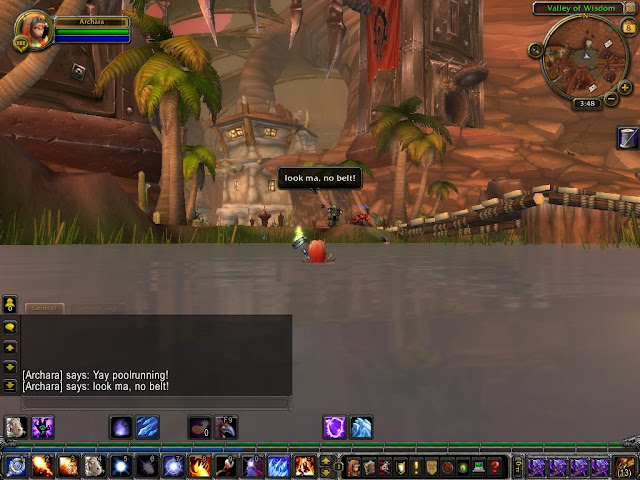 The appeal addictiveness of WoW is fairly easy to understand.  It's a predictable world, where hard work yields guaranteed payoff.  Achievement is measured in "levels", which are clearly displayed to all (facilitating comparison).   You start as a level 1, and after you go chat with Melithar, you're a level 2.  It took you less than 3 minutes, and now you're a bit better.  The flush of accomplishment washes over you, and you opt to delay a visit to the bathroom in favor of another quest.

As you advance, it takes more and more XP (and time) to reach the next level.  But still, you always know where you stand.  You know how many XP you need in order to level up, and you know what you need to do in order to rack them up.

In the real world, things are not so clear.  Few of us know exactly where are, in terms of our career advancement or success in other fronts; by contrast the online gaming world is a flashy graphic oasis of predictability.  It's no wonder so many escape there.

For the new runner, the similarities between running and World of Warcraft are striking.  You run a race, receiving a time as your result.  Usually, within about 10 minutes of the race being over, your thoughts turn to a) wanting to do it again and b) wanting to do it better.  (the 10 minutes previous were dedicated to wondering why the hell you ran the race).

So then you run a bit more.  And you enter another race two or three weeks later, and run a better time.  You've just leveled up.  And you're hooked.  And just like on-line gaming, the advances come easily as you slash minutes off of your 10K time.  At first.  And then the rate of gains slows, and you have to work harder for each PR.  But the PRs still come, and the increasing effort needed to gain each one only makes the eventual triumph sweeter.  Addictive personalities really aren't all that different; it's just the venue that shifts.

At some point, the advances slow even more, and you start to research how to improve.  World of Warcraft has leveling guides; running has various charts calculating what paces to run in your workouts.  And so, you start grinding -- simply repeating over and over the actions that will rack up what you need to make it to the next level.  Mechanically, without any enjoyment other than what you receive from your eventual advancement.  You hit the track, and chase the splits, because that's what you need to do -- the chart told you to.


There is a key difference, though.  With each action in World of Warcraft, be it killing a Plague Lurker or or obtaining the Sha'naar Key, you know exactly how many experience points you've earned. But there are no official guides listing the experience points earned for each run.

I sometimes envision XP rising in the air above my head at the conclusion of each workout or race, but the truth is that I have no idea if or how much I've advanced towards my goals.  There is no equivalent to the nice little bar at the bottom of the screen showing just how far I am from the next level, so that I know exactly what I need to do.  I won't know how far I am from leveling up, until I get there.

And unlike World of Warcraft, where your actions at worst earn you no experience points (or get you killed, but that's easily solved, ironically, by running back to your dead body), it's quite possible for your workouts to make you worse off, and not better -- to slide your XP bar back to the left.  And, again, you just don't know.

You'd think that lack of knowledge would make competitive running less appealing.  And yet, it makes it more.  The more uncertain you are about where you stand, the more of a thrill you get when you finally confirm your progress via a new PR.  The surprise makes it all the sweeter.  And the hope of that surprise (and perhaps the illusion of being closer to that new PR than one actually is), is what drives our training.

The trick, of course, is to avoid the temptation to grind away at your workouts unceasingly in the meantime between PRs.  Because, unlike Warcraft, the harder effort doesn't always yield the greatest reward.  And without helpful XP bubbles, the only way to deduce a lack of progress is by failure to advance.
Posted by AKA Darkwave, AKA Anarcha, AKA Cris. at 6:11 AM

Email ThisBlogThis!Share to TwitterShare to FacebookShare to Pinterest
Labels: Observations