I ran the Fairfax Four Miler last night, finishing in a time of 24:55, which was good enough for 3rd overall and a new four mile PR.

So yes, this race was a very pleasant surprise - I was not expecting to run or place anywhere near that well.

I haven't raced since the Richmond Marathon back in November, and I need to race regularly in order to perform my best in my goal races.  Thus, with the Houston Half-Marathon coming up in a couple weeks, I needed to race something.  And this race fit the bill.  It's not generally a fast race for multiple reasons, but it is a well organized and fun race.  So perfect for a rust buster.

I knew from the last time I ran this race that it was easy to let time get away from you, and get rushed before the start.  A 6 pm start seems late, but it comes earlier than you think.  So this year I planned ahead - picking up my bib ahead of time and tucking it into the glove compartment of my car (one less thing to do on race day) and also planning to leave early.

Good thing I did.  Consistent with my experience with rust busters, I was disorganized and a bit frazzled.  I missed my exit on the interstate, and then navigated the back roads of Fairfax County Virginia with something short of finesse.  When I finally got close to the race, I parked in the first open lot I saw, rather than try for something closer to the start/finish.  Which turned out to be the right decision, since all the closer lots were full or congested with traffic.

[if anyone has any illusions that I'm someone who has everything under control, let me assure you that such is not the case.  Rather, I'm someone who continually plans around my failings, so that things hopefully work out even when I screw up]

I parked around 5:10, which was just enough time to put my shoes and bib on, and start warming up.  For my warm-up, I went with my standard - 15 minutes jogging, 3 minutes at half-marathon effort, 4 bouts of 30 seconds at 5K effort, and 4 bouts of 10 seconds at mile effort.  Then a bit more jogging, some drills and strides and last minute clothing adjustments, and we lined up.

As noted above, I didn't have terribly high expectations for this race.   I'm still working my way back into fitness post-marathon, for one thing.  Additionally - this race is generally a slow one.  The course is hilly, with two 180 degree turns. 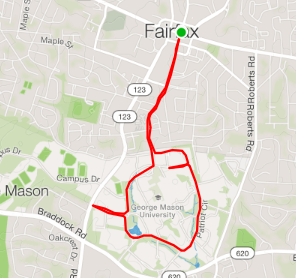 The race is also held after sunset, under street lights.  In my experience people of all levels generally run slower in the dark unless the path is extremely well lit - something about the interaction between visibility and perceived effort.  When you can't see well, the same pace seems harder.  Times are generally slow on this course, with many people running something not too far from their half-marathon pace for these four miles.  (of course, the fact that very few people are at peak fitness on December 31 could also have something to do with this).

So...time goals were pretty much out of the question.  I just wanted to run a smart race, and also re-acclimate to that distinct feeling of race suck.

I knew from previous races that the second half of this race was harder than the first.  The race basically ran as:
I also remembered that the finish line could be hard to see in the dark, so I memorized landmarks for 400m and 800m to go, to help me nurse myself to the finish.

Based on all this, my game plan was to go out conservatively, find a controlled rhythm, stay strong when others started to fall apart during the hard third mile, and then hammer home.

So when the gun went off, that's what I did.  Like always, many many people surged ahead of me, but after the first few minutes, most faded.  Fortunately, a few did not, and I found myself in a nice pack of about 10 guys.

As we approached the first hair pin turn, I was able to count women as they doubled back.  I only noted two ahead of me - neat!  Unfortunately, counting women distracted me from the footing, and I stepped on a rock and rolled my right ankle.  Which is my bad one.  Whoops.

I checked out of race mode for a few seconds, and confirmed that the ankle and my gait felt fine - nothing unstable or off.  So I turned race mode back on and continued my work.

I rolled down the long descent, and then began the long climb that matched it.  Sure enough, my pack broke apart as some people faded while others attacked the hill hard.  I did neither  - I just held a steady rhythm with the intent of saving the heroics for the last half mile.

As we climbed, I noted a woman up ahead.  Surprising, since I thought there were only two, and she wasn't either of the women I had spotted before.  So the bad news was that I wasn't in third.  The good news was that this woman was fading, and I managed to reel her in with my steady effort.

Another hair pin turn, and then we were in the final mile.  I waited until my 800m to go sign (the retirement home on the left) and started to open the throttle.  Race suck was in full effect and I was hating life, but I also remembered that race suck was exactly what I wanted from this race.

It's a downhill finish, and a bit steep right at the finish line, which just made things worse.  My legs locked up, and my arms started to windmill as I approached the mats.    I got over the mats without falling, but (embarrasingly) didn't have enough control of my legs to stop without falling forward.

Fortunately, a race volunteer was right there and caught me as I was about to fall.  Saving me from yet another finish line faceplant (though at least this one would have been after the mats).

After I managed to regain my balance, I stopped my Garmin.  It read 25:00 flat.  Which meant I had broken 25.  Wow.  Was not expecting that at all.  My previous 4 miler PR of 25:16 was from this spring in Central Park.  And while the Central Park 4 Miler course has its own hills, it's less hilly than this course, and also lacks sharp turns.  I did not expect to beat that time on this course.

Posted by AKA Darkwave, AKA Anarcha, AKA Cris. at 2:40 PM