Oh, the irony of it all (plus potassium, too)

We all hear it to some extent - iron levels are critically important to the competitive runner.  To be more specific, red blood cells are critical -- they're our mechanism of oxygen transfer.  And iron is used by the body to create the hemoglobin that the red blood cells use to carry the oxygen.

I had understood this importance for some time, and I've regularly pestered my primary care doctor for iron testing during my annual physical (to be more specific -- serum ferritin testing, as I understand that's the key metric).  My primary care doctor (a non-runner) thinks I'm a bit crazy for pushing this issue.  In her experience, it's quite rare for well-nourished non-vegetarian adults to have an iron deficiency and more common for them to over-supplement.  Plus, anyone capable of running multiple miles in a row can't possibly be anemic.

As you can probably guess, she doesn't have much experience with competitive runners and the effect iron can have on their running.

So, I've advocated for this test annually, and sometimes gotten it, sometimes not (to explain, my bad circulation makes me a difficult blood draw, and sometimes we have a very limited quantity of blood to analyze, and she'd rather run another test.  Because again, I shouldn't be concerned about iron.)

My perspective has always been that I am a female long distance runner, and so I need to worry about this.  As a dedicated red meat eater - specifically bison, which I eat at least 4 times a week, if not close to daily -  I'm not a huge risk.

I'm also decently educated about nutrition.  I know not to combine iron and calcium, and I know that animal-based sources of iron ("heme") are superior to vegetarian sources ("non-heme") in terms of uptake.  It's not just what you consume, but what your body actually takes in, that matters.  But still, I should be watching this.

The issue was brought to my focus again recently when a) I reread a great entry from Camille Herron's blog and b) my teammate Alison determined that she was significantly deficient.  Hmmm.  A really good idea to stay on top of this -- and to get tested more than once a year.  And, since I just ran a mile PR, why not get it checked now, to see how things look when I'm doing well?

And so, I got my iron tested last week.  I followed Herron's example, and used Healthcheck USA to do it. Easy and cheap (except for the 12 hour fast, which was miserable).

And...here's the results, plus my results from previous years (note how I fearlessly post my medical information on the internetz).  Pretty interesting.  This basically covers the testing I've done for the past 8 years, plus where I was, running-wise, at the time.  A few things stand out to me. 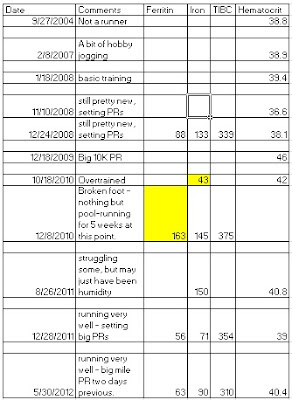 a) my current serum ferritin (my understanding is that this is what you want to check) of 63.  My understanding is that 60 or above is optimal  (also see here, at page 7 - this is a great article that Camille Herron is hosting).  Right now, I'm at 63 and running well, though in the past I've been much higher.

b) there was one point in my life where I was feeling overtrained and sluggish (October 2010).  I *really* wish that I had gotten my serum ferritin tested at that time.  Instead, I only got iron, which is different.  Still, it's striking how low my iron level was at that time - 43, as opposed to other times where it's been 71 or above.


Soon after that test was taken, I broke my foot and had to abandon all land running.  I had another test done after 5 weeks of non-impact exercise only (meaning no footstrike hemolysis), and...look at that iron level (jumped from 43 to 145).  And also look at how high my serum ferritin is (163!!!).


My hunch (with no documentation, other than this chart) is that iron levels and serum ferritin levels are positively correlated, and so my serum ferritin was also in the basement at that time.  But oh, how I wish I had gotten it checked.

And, lesson learned.  My plan from now on is to check my iron 2-3 times a year.

So my, coach had a nutrition counselor in to speak with us on Monday night at Road Runner Sports (just one of the many perks of training with Capital Area Runners).  She covered stuff like iron, which I already had some familiarity with, but also potassium.

Now, I know that potassium is an electrolyte, has an RDA, and is fat soluble (correction -- apparently potassium is excretable through the kidneys) -- this last point means it's possible to OD on it with supplements.  What I didn't realize is that it's apparently also possible to consume too much potassium based on diet alone.

Yup, it is.  Especially if you drink a lot of coconut water.  And I might just have a slight coconut water addiction. Add to that the fact that my dietary staples include potatoes, bananas, and guacamole, all of which are potent sources of potassium, and..I decided it was worth checking my potassium.

As it turns out, last week's serum ferritin test also included a CBC (complete blood count) that included a value for potassium.  And...mine was 5.3, with a recommended range of 3.5-5.2.  So slightly high.

But then I went back and parsed through my old tests, and my potassium level has generally been at or over 5 for the last several years, and I've seen 5.3 a few times before.  And the blood work that my doctor does lists a recommended range that tops out at 5.5, not 5.2.  And my doctor has NEVER raised any concerns about my potassium.  False alarm.  Put away the life boats and peel another banana.

So, two lessons here.  1) give a little thought as to whether you might be ODing on certain things just from your natural diet (and maybe cut back on the coconut water slightly); 2) don't go too crazy jumping to conclusions from these tests.  It's good to be a skilled amateur, but remember that your primary care doctor is a pro.
Posted by AKA Darkwave, AKA Anarcha, AKA Cris. at 6:30 AM