So, somewhere along the line, I ended up on the mailing list for "Active Schwaggle."  As far as I can tell, it's a social buying site similar to Living Social or Groupon, but targeted at runners and triathletes, and run by active.com (a website that handles registration and results for some of the races that I run).

I got an interesting email the other day. 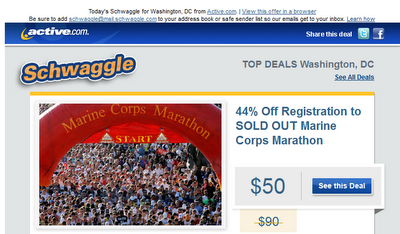 Social buying sites are usually used when the seller wants either to promote something or to unload something.  Neither criteria seemingly applies to a very well known marathon that's been sold out for months (and that sold out in a matter of hours).

I was intrigued.  So I clicked to see the deal. 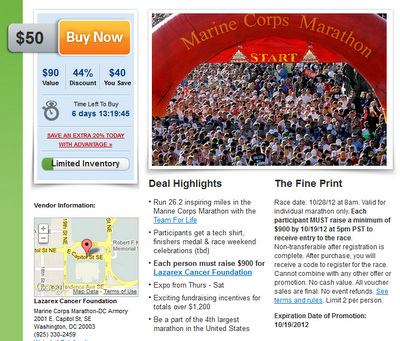 I am amused.  First of all, the entire concept of a "Groupon" - a classic example of the modern consumer mindset - for a charity cracks me up.  And then the sucker punch of "Hey!  Save $40 (but only if you raise $900)" is truly awesome.

None of this, BTW, is meant to be an attack against the Lazarex Cancer Foundation, which from a very preliminary glance appears to do good stuff. (note that I have not researched them deeply.  For all I know, they're as deceptive as Komen in terms of how they manage their funds).  And the fact that Lazarex apparently makes its runners pay their own entry fees elevates it above groups like Team in Training, where runners get their entry fees and travel expenses funded.  In essence, TnT runners get their fun marathon trip paid for by their friends.

I can't blame Lasarex for jumping on the social buying bandwagon.  They're just using all the techniques available to them to promote their cause.  And hey, even if only a few people actually sign up, it still is probably worth it to Lasarex.

But still.  I can't help but wonder what comes next...
Posted by AKA Darkwave, AKA Anarcha, AKA Cris. at 9:00 AM