Things got jumbled a bit this week.  Last week I did my long run on Saturday (instead of Sunday), so I pool-ran on Sunday (instead of Monday).  Thus, I ran on Monday when I don't normally.

The weather continued to throw wrenches into our schedule.  Both Tuesday's workout and Friday's one mile pick-up were done under the Whitehurst freeway once again, and my normal Thursday double was done partially in the pool, due to a snow storm.  As for Sunday's race, the weather affected that one also.

It's all a bit annoying, especially for someone like myself - I like to have a schedule and stick to it, gosh darn it.  But I feel like I'm running better and better, and a lot of that is probably due to the fact that the frequent weather interruptions keep me from overtraining, and the repeated relocation of workouts to under the Whitehurst forces me to run all workouts by effort, since I have no idea what distance I'm running.

In non-running news, I adopted a new cat, whom I named Isabella.
Affectionate to the point of being doglike, she's quickly worked her way into my heart.    She's a three year old kitty who has special needs due to significant allergies.

The short version of her story is that she was turned over to the Humane Society of Wicomico County, MD by her owners, who couldn't afford her veterinary needs.  The Humane Society is regularly put into the horrible position of deciding which kitties are adoptable, and which ones are not.

With her needs, and the condition that she was in (overweight, missing large patches of fur, and with lesions from scratching herself), she was determined not adoptable.  And brought to my sister for euthanasia.  As sometimes happens, my sister couldn't bring herself to put "Dianna" to sleep due to her young age, her very friendly nature, and the fact that her health issues were all manageable (if expensive and requiring some expertise).  So she became a "clinic cat" at my sister's practice, where she was brought back to health.

It was a good life, but she really deserved a full time home and family, rather than being shuttled between the veterinary clinic during the week and various employees' homes on weekends.  And now she has one.

Her needs are numerous.  They include: 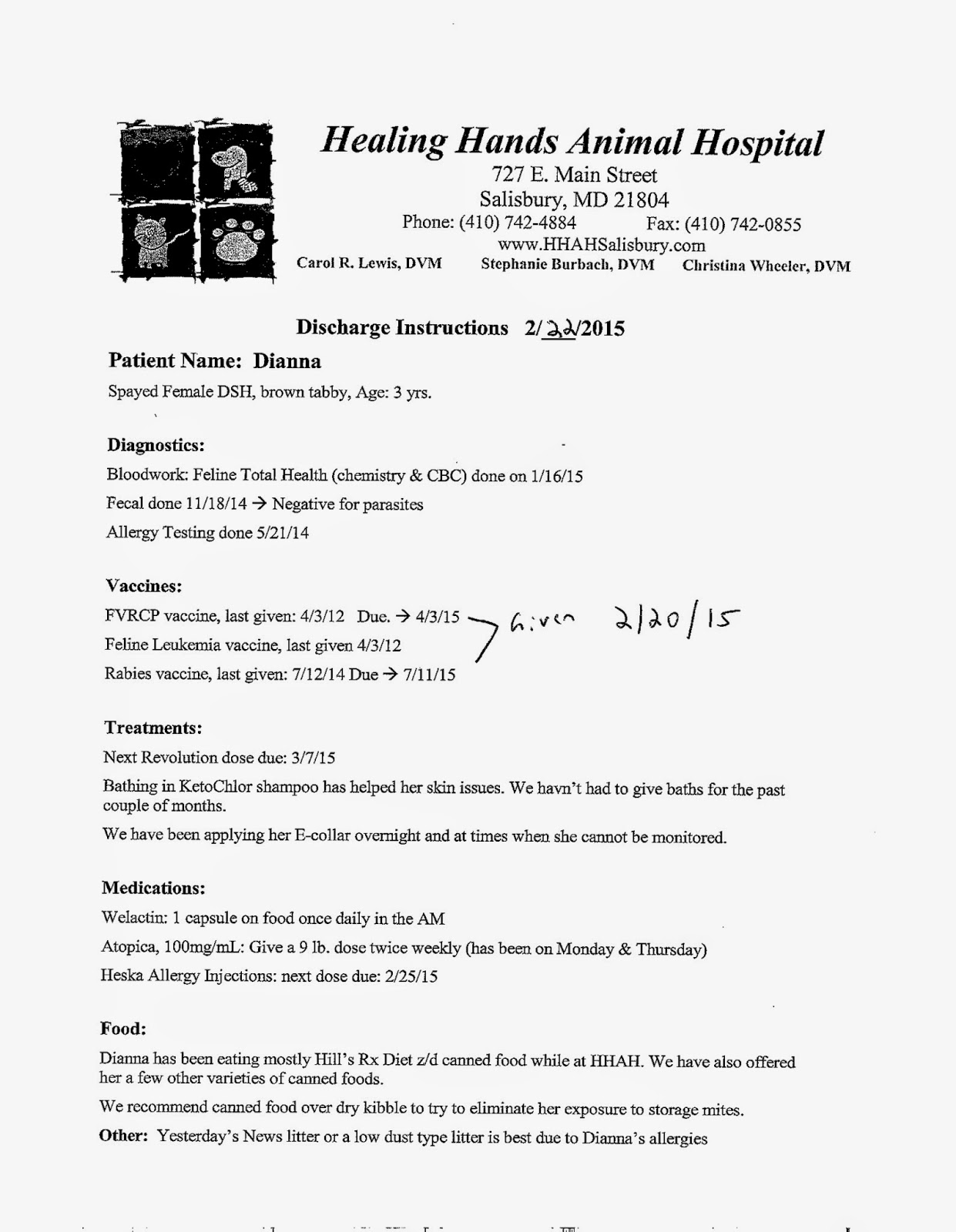 Luckily, I'm comfortable with all of this (well...maybe not the bath...).  And though it's a similar list to what I had to do for Mina, it's actually much less burdensome.  Oral medication twice a week beats pilling them 2-3 times a day.  And a shot every two weeks beats one every other day.

Having a new cat triggers emotions related to my loss of Mina.  That loss still hurts, and it stings  when Isabella tears apart Mina's old toys with gusto, or playfully knocks a framed picture of Mina off the shelf (I mean, seriously?  You can't knock another picture off?).  And it's a bit sad to realize in the middle of the night that I'm trying to relocate a 9 pound kitty across the bed, not a 5 pound one.  Or that I'm inhaling brown kitty fur instead of black.  But overall, the happiness wins out.  I'm very happy to have her with me.

Tuesday:  11 miles, including a workout under the Whitehurst freeway of 4 repeats of a loop around 1300-1350 in distance (each rep was bit over 5 minutes) with 3 minute recovery, followed by some injury prevention work and 1050 yards easy swimming.  Foam rolling in afternoon.

Thursday:   Yoga and "4 miles" pool-running in the morning.   Later, another 4 miles very easy (8:42), with some drills and strides, and some upperbody strengthwork and injury prevention work,.  Foam rolling at night.

Friday:  7 miles, including a "mile pick-up" (actually around 1 and 1/3 miles) under the Whitehurst, followed by 1150 yards easy swimming.    Foam rolling at night.

Sunday:  9.5 miles, including a ~3 mile warm-up, a 10K race in 40:26, and a half mile cooldown.  Felt horrible, so skipped my usual yoga and recovery swimming in favor of chili and bad television.   Foam rolling at night.
Posted by AKA Darkwave, AKA Anarcha, AKA Cris. at 3:05 PM